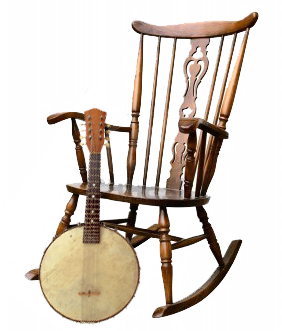 “New”, “innovative” and “Presbyterian” are three words that don’t seem to live too often in the same sentence, as attendance at most churches in America today is plunging. Edwin Lacy is bucking the trend, forming a new church in the Indian Valley area of Floyd County.

Edwin has been a friend for close to twenty years now, although he’s been absent for most of that, living in Indiana for over a decade, working in churches there. A recent cosmic convergence of events has brought him back not only into this area, but into my life. First, he found an old, abandoned church building in Indian Valley and convinced his Presbytery that it was ideally suited for his new idea. Second, he relocated from his most recent assignment in Bristol and moved into a house in Radford. Third, I bought a banjo.

Edwin is a preacher, but what defines him to, well, I suspect everybody who knows him, is the amazing things he can do with that drum-with-strings, that possum-skin-on-a-gourd, that instrument of countless depreciatory jokes: the claw-hammer banjo. He’s teaching me how to play mine.

We got together the other night for my second lesson and I asked him about his new church. He’s calling it the “Wild Goose Christian Community”.

Edwin said, “We will have a distinctly Appalachian worship style. When you walk in, the first thing you’ll see is a stone fireplace. There will be handmade quilts on the wall. It has a wooden hardwood floor and wooden beams overhead. It will feel like a lodge or a cabin.”

Many of the traditional Appalachian churches I’ve visited during research for my books have been austere, undecorated places with hard wooden pews and more of a lectern at the front than a pulpit. Edwin said, “We’re getting rid of all the pews and are bringing in rocking chairs. We’ll assemble them into a circle where we’ll sing and play instruments together as we worship. When we’re done with the ‘service’ we’ll move the chairs away and have a square dance.”

Edwin’s appearance has changed over the years since he left for Indiana, with a close-cropped head of white receding-hairline hair and a trim white beard, but the mellifluous voice, infectious smile, and hyper-local accent are still there. He’s as warm and friendly as an old blanket; I can’t see how anybody wouldn’t be drawn to him.

“Traditional Appalachian music will be integral to everything we do. We’ll play religious stuff, but non-religious stuff, too. I don’t think this is done anywhere else. We’ll have fun. We’ll worship on Tuesday nights rather than Sunday mornings, because we don’t want to compete with the other churches. I expect — and hope — some of our parishioners will go to another church on Sundays but come to ours on Tuesdays.”

I told him my impression of Appalachian churches is rigid, moralistic, top-down, and paternalistic.

“That is not what we’re going to do. To me, Appalachia is about barn dances and house parties. Barn raisings. Canning. Community things.

“I chose ‘Wild Goose’ because in Celtic Christian traditions, the wild goose is the symbol for the Holy Spirit. They felt it was a better representation than a dove because a wild goose is free, strong, humorous and, well . . . wild. A wild goose will also sneak up behind you and bite you in the seat of your britches — an apt metaphor for how the Holy Spirit often works in our lives.

“I want to bring the love of the land, the camaraderie, the music, arts and crafts, and the community of willingness to help each other. I want to celebrate these things.

“We’ll start by greeting each other, where we just visit. Then we’ll move into a more liturgical session, when we greet God. We’ll have prayer requests, prayers of thanksgiving and for people needing help. We’ll have the Lord’s Prayer. We’ll have music as a bridge to the spoken sections. Traditional churches are audience and performer oriented. People observe worship rather than participating. I want to radically move away from that. I’ll be in a rocking chair, too.

“We want to appeal to people who may have given up on churches but not on Christianity, to give them a place to find community. Hundreds of thousands of people have left the church but not Christianity. We want to welcome them back. I believe in embracing the quest, embracing the mystery. I’m not preaching answers, I’m preaching questions.

“Music is a language of emotion and spirit. Instrumental music is the most powerful, removing us from the intellectual process to the deeper places. It is psychologically and spiritually powerful. One of my band-mates concluded when she was four or five years old that music was the language of God. Perhaps God didn’t speak the world into being but sang it into being instead.”

Michael’s new novel, Providence, VA, is now available through his website at or at the Virginia Tech Bookstore and area Deli Marts.

From Union Presbyterian Seminary and Presbytery of the James